Human Cages, A Recap of Prisons In America (Part 2 of 2)

This is the second installment of a two part series, in part one I talked about the origins of prisons in the United States. You can read part one Here.


After the puritans and all those who came after established the tie between prisons and maintaining slaves, we fast forward 250 years to the civil war when slavery becomes illegal. The Emancipation Proclamation did more than just release humans as property of their owners, it also nullified a massive network of federal, state and local laws that defined how the free labor in this country could be brought into submission. However when you have a society that is divided as widely as masters and slaves, people do not change as easily as laws. 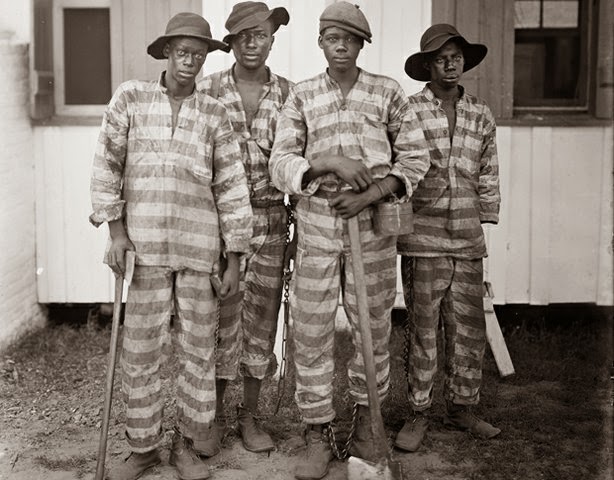 The US economy based largely on farming  and other labor intensive industries could not function without that free labor source, but how could a free people be made to work like slaves? The key was to quickly build a new network of laws eventually called Jim Crow, and use the already functioning prison system to enforce them. The laws essentially redefined the slave class legally by removing the word "slave" and replacing it with pseudonyms. The result was a series of extreme laws that could be selectively enforced to arrest People of Color for crimes like loitering, being a stranger, acting unusual, etc. Once arrested and in the old prison system additional laws that require repayment of large fines though hard labor, with additional fees for prison time, worked together to insure that once you were pulled into the free labor pool you would probably not get back out alive.

The end result of all this for People of Color was very familiar:
Fast forward again 100 years to the 1960's, these civil rights violations finally get heard by the American people and the oppressive system is outlawed once again! Now the laws and the prison system that enforced them will finally be dismantled... in reality, some gains are made, but people do not change as easily as laws. 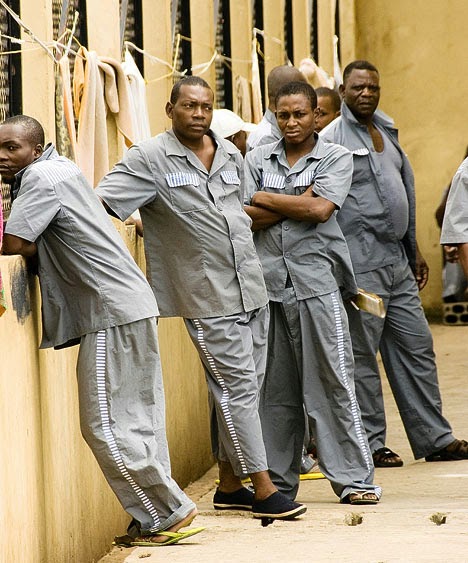 Within a few years a swarm of new laws begin cropping up across the country, these laws were different, instead of words like slave, or colored, they used even more coded language like removing the "criminal element", getting "tough on crime", and the "war on drugs" (which at the time, both drug use and violent crime were in decline). The result was a massive wave of felony incarcerations and people on probation in black and other low income communities across the country. Offences that were misdemeanor infractions before, now carried mandatory sentences of decades. Our prison population swelled by over 800 percent, to the highest per capita in the world. So fast that we could not build prisons fast enough to hold the influx. We had to start hiring private firms to take the overflow of chained humanity, and states now collectively spend over $50 billion per year to maintain our prison population.

Something else changed around this same time in our country, the global economy started pulling low paying jobs away to lower paying counties, the inner cities became a void where there was little work to be had. At the same time banks started literally putting red lines around neighborhoods that they considered bad investments, with no home or business loans available, jobs disappearing, and an increasing inner city population rotating in and out of prison the situation has spiraled to where we stand today.

For many low income families in this situation the end result is all too familiar:
If you are starting to see a repeating pattern, you are not alone. While we are a long way from slavery, the same destructive patterns that tore this country apart for hundreds of years are still to a lesser degree, tearing us apart today. If we continue to incarcerate our inner city citizens the financial burden alone is not sustainable, let alone the ramifications on our society as millions of disenfranchised and justifiably angry people are released back into our communities after having any sense of normal family life violently torn away from them decades ago. With no social supports, no family supports, no opportunity for legitimate employment, that road leads directly back into prison and the spiral continues.

Before someone brings up the argument of personal responsibility, there are many people of every color in prison today that need to be held accountable for choices they made, there are other chronically broken individuals that need to be kept under guard because they will put others in danger if freed. I am not saying we don't need prisons, only that we as a country have created an enormous prison culture and an expectation of nothing better for millions of youth today. We can do better.

Getting back to the question that kicked this off, why do we build prisons? It's easy to see that the large scale embedding of slavery within our prison system 400 years ago started a cycle of damage that is still putting all of our freedoms and safety at risk. It's time to change the very core of our prison and justice systems from a machine that creates criminals to a machine that creates better citizens. Crime should be punished, but if we continue to destroy the lives and families of our neighbors, we steal the very hope from those we are punishing, and we only wind up punishing our society as a whole. For those seeking a better life, liberty and the pursuit of happiness, we must give a clear and wide pathway out of the prison system and the larger mess we as a country have participated in creating.

There is a growing movement to repeal laws that have been proven ineffective like 3rd strike and high mandatory sentencing for non-violent crimes, ending stop and frisk and other procedures that would never be tolerated if practiced on wealthier targets. The funding for these programs needs to be shifted to rehabilitation, family support, job training, small business and community growth programs. It is time to end this cycle. It is time to take back our families, our neighborhoods and our country and be united.

For more reading on this topic I recommend the following:
An article from the Editor in Chief of US News and World Report - Here
An excellent interview with Michelle Alexander about her in-depth book on PBS - Here

Posted by Whitewashed USA at 5:00 PM