Bringing the Color Line into Focus for White America

Why are people of color always talking about racial problems, why keep bringing up the past?


This is how it usually happens; there is a horrific event that catches the nation’s attention for a few short moments of time. It might be the OJ Simpson trial, the beating of Rodney King, or the killing of Trayvon Martin. As the scenes play out repeatedly on our televisions and smart phones, there is inevitably conversations that happen in split screen view with a civil rights proponent on one side saying that racial bias and hate crimes need to be stopped, and someone on the other side rolling their eyes and asking why the race card is always played, and why we are wasting our time discussing race relations when such an awful event has happened.

Why does race seem to always get pulled into the conversation by some, and why is it always dismissed by others?

In an attempt to answer this question we need to look at both sides of this conversation and then pull back the curtain and see the color line that divides them.

Although each of the events listed above had a drastic impact on those involved, for our purpose here I want to draw your focus away from the events and on to the conversations that inevitably begin to circulate. These conversations typically start when the news and other media sources look for someone to comment on what happened, if the event can be perceived as race related in any way, the media will reach out to people involved in the civil liberties movement to get a comment. At this point there will be a very simple sound bite about how this travesty needs to be investigated further. Then a short time later a strong response comes loudly and clearly in defense, along with the accusation and condemning of racial motives.

To understand what is happening here we need to look behind the scenes. After that first soft comment to the media, there is a vetting process performed on the civil liberties side to see if the victim of the crime is a good candidate for defense, by checking for obvious gotchas in their past like domestic violence or drug related crimes. It is only natural that this should happen, because those fighting for racial equality are placing not only their own reputations but the validity of the civil liberties movement on the altar of public opinion in each of these cases. You can imagine the embarrassment that could and does happen when an individual who has been placed on a pedestal as the victim of injustice turns out to have a pattern of self-destructive choices behind them. If the victim is potentially a good example and the initial evidence looks like race could have been a factor, then the logical move is to use the opportunity to draw public attention to the very real and larger problem of racial bias in this country.

Which brings us to the eye rolling and accusations of “playing the race card” that come from the conservative spokesperson on the other side of that split screen. For many white Americans, the discussion of race is strictly historic, bad things like slavery happened long before we were born and even the civil rights movement is something many of us only know from TV documentaries and grade school discussions. Now, except for the occasional racially tainted joke at work there is very little evidence seen in our world of current day racial problems. This is not a case of apathy; it is a case of invisibility. Because racial discussions are so uncomfortable for obvious reasons, white America helped push for new laws in the 1960’s and then wanted to put it to rest, and stop talking about the issue altogether. When the footage of marches and riots stopped appearing on the news every night, we stopped paying attention, and eventually put the whole topic in the bucket of “not politically correct” to talk about. Because of this and other reasons beyond the scope of this article, racial bias and civil liberties have become an invisible problem that remains hidden away. This is why, some white Americans, feel that the public accusations of racism that pop up in so many news stories seem inflammatory and overstated for the individual situation.

In my article on How to Stop Racial Bias, I describe why changing the law is a good start, but that it does very little to change underlying social problem. In this case those underlying problems have all been alive and well for people of color, from the 1960s to today, and the issues that they face today are compounded by the fact that it’s not socially acceptable to bring them up. This has caused a larger and larger gap between the experiences of the white community and communities of color in this country. This gap is called the color line, it is a radical difference in experience, perspective, and attitude that divides us.

So, why are people of color always bringing up the past? Because for them it is happening right now, it is a current problem that we as white Americans can only see clearly in history books. This makes discussing that history one path that might help us set aside our fear of blame and let these hard conversations happen openly. A little light and clarity always go a long way towards empathy and ultimately change.

Posted by Whitewashed USA at 7:00 AM No comments:

How to Stop Racial Bias and Change the World

Racial Bias and Prejudice is a Bad Thing, But What Can I do?

Here is one for the world shakers, for anyone who has seen the nasty results that come from a society that turns its nose up on those labeled as different, weird, or in any way less than “normal people”. This is for you, who want to stand up and say “This is wrong” but are not sure how or when to do it so that it will make an impact. I am specifically speaking to white America, if there was such a thing as whiteness or a way to classify it. However, by common usage we know who we are.

First we need to understand what we are trying to change.

Racial bias can take on many forms, however for this discussion I would like to focus specifically on racial bias as negative or preferential behavior of individuals based on perceived race. The negative action of a person towards another person based on how the other person appears, especially actions from those here in the United States we call “white” directed at those generically referred to as “black” or African American. This kind of racial bias has been recognized and fought for millennia by governments and groups that recognize the real damage it causes to a society as a whole.

This battle has often taken on the form of laws, policies and in some cases police or military interference. While these measures can, and do, impact those negative behaviors, they can at best only control some behaviors and do not change the underlying cause of the problem. To address the cause, the real root of the issue, we need to understand that negative behaviors are the outward expression of an internal negative attitude, those attitudes are the product of an individual’s perception, and that perception comes directly from the life experience and history of that person.

So how can you, as an individual make a difference?

You could grab someone and make them behave differently…. But that would not affect their attitudes, and you would probably be arrested for trying. You could tell someone they have a bad attitude and ask them to change it… but this would most likely cause resistance since the attitude is only a product of perception. You could try to force your perception on to them… but without giving them your life experiences along with it the perception would not mean anything. This leaves us with the last and ultimate option for change: Changing the life experience of another human being by stepping into that experience and making it different.


Every time we interact with someone else in our community, we shape the experience of that person in a small way. Once we become aware that racial bias exists, we can change our own behavior and discuss those changes with those around us. These conversations help set the social norms for what is, and is not OK in our society. When we have a firm grasp on the kind of behavior that is acceptable around us we can recognize and point out when someone is acting in a way that is unfair or shows bias. You might be thinking that someone who feels repressed or treated unfairly should speak up for themselves, and this is true. However, when it comes to interactions that shape perspectives and change people, they will most likely come from someone perceived as a peer, not from someone the person is already disrespecting.

This means that we need to open our mouths, if it seems like someone is getting treated worse than you, they probably are. Say something. It’s alright to point out in a non confrontational way that it’s not fair, not OK and not how we treat people here in _____ fill in the blank. The important thing is to step in and change that experience for everyone involved so that the next time the situation comes up that past experience will have hopefully improved that person’s perspective, which will change their attitudes, which will ultimately change their behavior. With this in mind, that small moment when you say something, is exactly the world changing event that is needed right now.

For those of you interested in changing the world, I will give you five simple steps to get you started. From there I expect you to find your own way to make a positive difference in yourself and the people around you. Let’s get started with one of those cool diagrams: 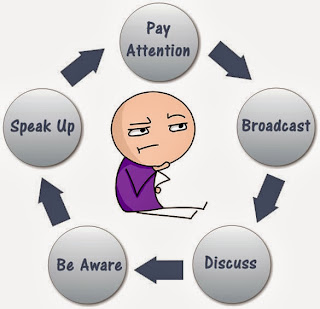 Here is how it works:

Step 1:Pay Attention: Look at what is happening to other people in the world and put yourself in their shoes.
Step 2:Broadcast:  when you hear of something happening that is not right, make the people in your contact circles aware of it.
Step 3: Discuss:  with those people whether this is a behavior or attitude we want in our society.
Step 4: Be aware: when you are at the store, movies, church and you see that behavior or attitude.
Step 5:Speak up: it’s alright to tell someone “That’s not OK” or “Not cool”. You don’t need to attack, just educate about what is acceptable.

This is heavy, it involves changing the human heart at its core and impacting the world around you in ways that often cannot be undone, so use this power wisely and go shake it up!

Posted by Whitewashed USA at 12:46 PM No comments: